Let's talk about cold cranking amps. What is CCA or Cold Cranking Amps?

Cold cranking amps. Now when you purchase an automotive battery, you're going to find that there are two important specifications that you're going to wanna be interested in.

One of them is its storage capacity in amp hours, a, dash h or a h, a typical figure for a car battery is sixty amp hours, but you wanna to make sure that that battery can store enough juice. To suit your needs for a long period of time.

But just because a battery can store a lot of Juice has no bearing on how well it can actually start your car or your truck, especially when it's cold.

And now by cold cranking What we usually mean is that after your engine has been allowed to cool down, to the temperature of the environment, room temperature or lower.

Let's just say around forty degrees or zero degrees Celsius or something like that?

Once your vehicle engine has been allowed to cool down, it's going to need a certain amount of current yet in a very short burst in order to start up.

Just because a battery can store a million amp hours, doesn't mean that it's going to be able to start your vehicle from a cold situation. 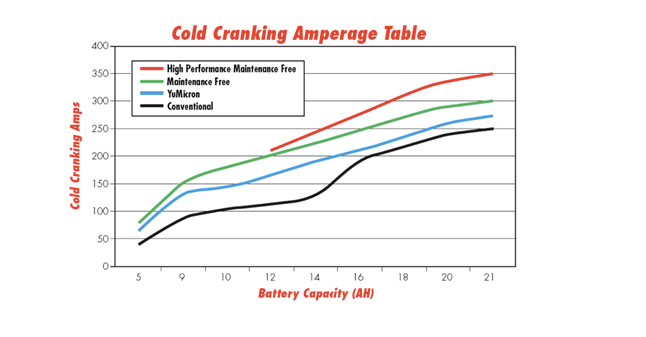 Now when you're using... Let's just say that this current right here, the maximum scale here is seven fifty amps. And we're talking about time here, say in... Oh, maybe seconds, not hours as we did with the video on storage capacity in amp hours, but seconds, zero one two three, and so on.

Now when you first turn that key to start that vehicle, it's gonna demand a huge amount of current in order to get those spark plugs going and get everything up to speed it's gonna be a sudden spike.

Maybe you're gonna have to back off and try again.

It doesn't... If your battery has only sixty amp hours to begin with seven hundred and fifty amps. That's that's not gonna last you very long.

You might not be able to starch your vehicle at all, especially when it's really cold. And that's why cold old batteries.

That's what they mean by cold cranking amps and that is an important figure because you wanna be able to start that car when you somewhere you've never been before and you don't know anybody and you don't know even where the tow trucks are and all that. You don't want any of that nonsense if you can avoid it.

So get a brand new battery every three or four years, I'd recommend maybe even every two years in a tough climate like this, make sure that you got those cold cranking amps when you need them.

CA or Cranking Amps and CCA or cold cranking amps. These are the standards that most battery companies use to rate the output capacity of a battery.

All in all, think of these like performance attributes, such as horsepower in the automotive industry.

CCA or Cold Cranking Amps is a rating used in the battery industry to the define battery's ability to the start engine in cold temperatures.

Again, this is for cranking batteries in cold temperatures to provide you with enough starting power.

Is There A Difference Between CCA and Cold Cranking Amps?

This measurement is not particularly important for a deep cycle battery, though is the most commonly known in frequently a used battery measurement.

We'll have to cover its correlation in a deep cycle battery later but for now, let's focus on CCA or cold cranking amps.

CCA measurements assure that the battery has sufficient power to crank the engine, especially when cold climates.

Typically, CCA ratings for a car range from three fifty to six hundred half and tend to be a little higher for trucks.

Why cold? Well, generally speaking, it's easier to start an engine in a warm environment than in a cold one.

What Is A CCA Rating?

Many manufacturers have a CCA rating equal to an amp hour for original equipment.

As anyone who lives in a cold climate... with a high mileage diesel truck, snowmobile, ATV, and other powers sports vehicles, It takes a long time to start some vehicles.

Whether that is due to high compression engines, extremely cold climates, or a mixture of both.

I often hear people say, I'm going to buy the battery with, the most cold cranking amps I can find.

Yes, well more maybe better but it may not be necessary.

CCA directly applies to the amount of starting power Your vehicle will draw on startup.

The battery is sending an electrical jolt of energy to the engine jump starting the electrical circuitry throughout the vehicle.

Next, it will continue to keep the current steady, not only does your battery provide energy required to start a car, it's also stabilizing the voltage in order to keep your engine running.

CCA or cold cranking amps in technical talk is the number of amperes a lead acid battery needs in zero degrees fahrenheit or Negative eighteen degrees Celsius, can deliver for thirty seconds, while still maintaining the terminal voltage of above seven point two volts or equal to one point two volts per cell.

Moving on to CA or cranking amps. This is another standard. That battery companies used to rate the output capacity of a battery.

Very similar to cold cranking amps or CCA, but these tests take place in a moderate environment. Thirty two degrees to be exact. In technical people talk, CA or Cranking Amps is the number of amperes a lead acid battery, thirty two degrees fahrenheit., Zero degrees Celsius can deliver for thirty seconds. To pass the voltage must stay above, seven point two volts are once again, one point two volts per cell. In other words, cranking amps determine how much power you have to start your car in most climates.

Going back to what I said earlier, buying a battery that is strictly based on CCA cold cranking amps is not always your best bet.

Typically a battery in ATV, Motorcycle, Snowmobile, Jet Ski, UTV, and other power sport vehicles are starting applications and can be classified as a starting battery.

Here at BRS Battery we have developed the BRS Super Battery - the world's first power sports battery with an incredible full replacement 10 Year Warranty with no proration. We super charge our batteries with high frequency algorithms creating a more powerful battery.

When you buy a BRS Super Battery you're obtaining the longest warranty in the industry. Why is it the longest? Because we are confident that our technology in our products will provide our customers with consistent energy that powers through any climate or temperature range. You'll receive sealed AGM batteries with thicker, heavier plates, and more lead in turn, which means a longer battery lifespan and with a battery can deliver more starting power.

I hope this helps you get a better perspective in grasp of CCA and cold cranking amps.