AGM vs Lithium Battery For Motorcycles

AGM vs Lithium battery for motorcycle

Many consumers have been asking whether the BRS Super Battery AGM is better than a Lithium Ion battery. Yes it is! First, it is an AGM motorcycle battery . An Absorbent Glass Mat battery typically having a shelf life of 2-10 years with an incredible 10 Year Warranty. On the other hand, Lithium batteries are much lighter than AGM batteries and also Lithium batteries don't perform well in winter and colder temperatures. If you're looking for a battery for your motorcycle engine that has a longer lifespan and that holds more charge, then BRS Super battery is your choice.

It is not uncommon to see the words Agm vs lithium in the same sentence in regards to motorcycle batteries. Many people are interested in learning more about these two types of batteries. They want to know which one is better, what are the benefits of each type, which one lasts longer and, how much do they cost to buy.

AGM Technology Allows Repeated Charges and Discharges Without Diminished Performance. It's Spill, Leak Proof and has Deep discharge protection. It contains Plate grids from lead-calcium alloy, free of antimony, and has Excellent starting and cycling. More importantly, Installs in any position except upside down.

What Are The Benefits Of Using A Lithium Motorcycle Battery?

Motorcycle batteries have traditionally been manufactured using lead acid cells. Lately, lithium-ion batteries have been a popular choice for powering electric vehicles and motorcycles.  Lithium motorcycle Batteries are more lightweight and have a higher energy density than lead acid batteries. Lithium based batteries have become a popular choice in the automotive industry. Although lithium motorcycle battery may cost more to maintain, they can help you save money in the long-run by extending your vehicle's lifespan, improving fuel efficiency, and lowering emissions. Lithium Iron batteries are a new type of rechargeable battery that is more efficient and lasts longer than traditional nickel metal-hydride batteries. They also have a much lower internal resistance, which means they can produce up to 3 times as much power as conventional nickel metal-hydride batteries. These features make Lithium Iron batteries one of the most promising candidates for use in electric vehicles, as well as for storing solar energy from panels or wind turbines.

Usually, lithium powersports batteries consists of a lithium positive electrode and a carbon negative electrode, whereas its electrolyte consists of lithium ions in an organic solvent. The ions move towards the positively charged electrode while discharging, and the process reverses when the battery is being charged. Also, Just a quick note, lithium-ion batteries need to be woken up when it's cold. You need to press the starter, then let the battery sit for 30 seconds and there you should have all the cranking power you need.

What are the benefits of AGM Battery? 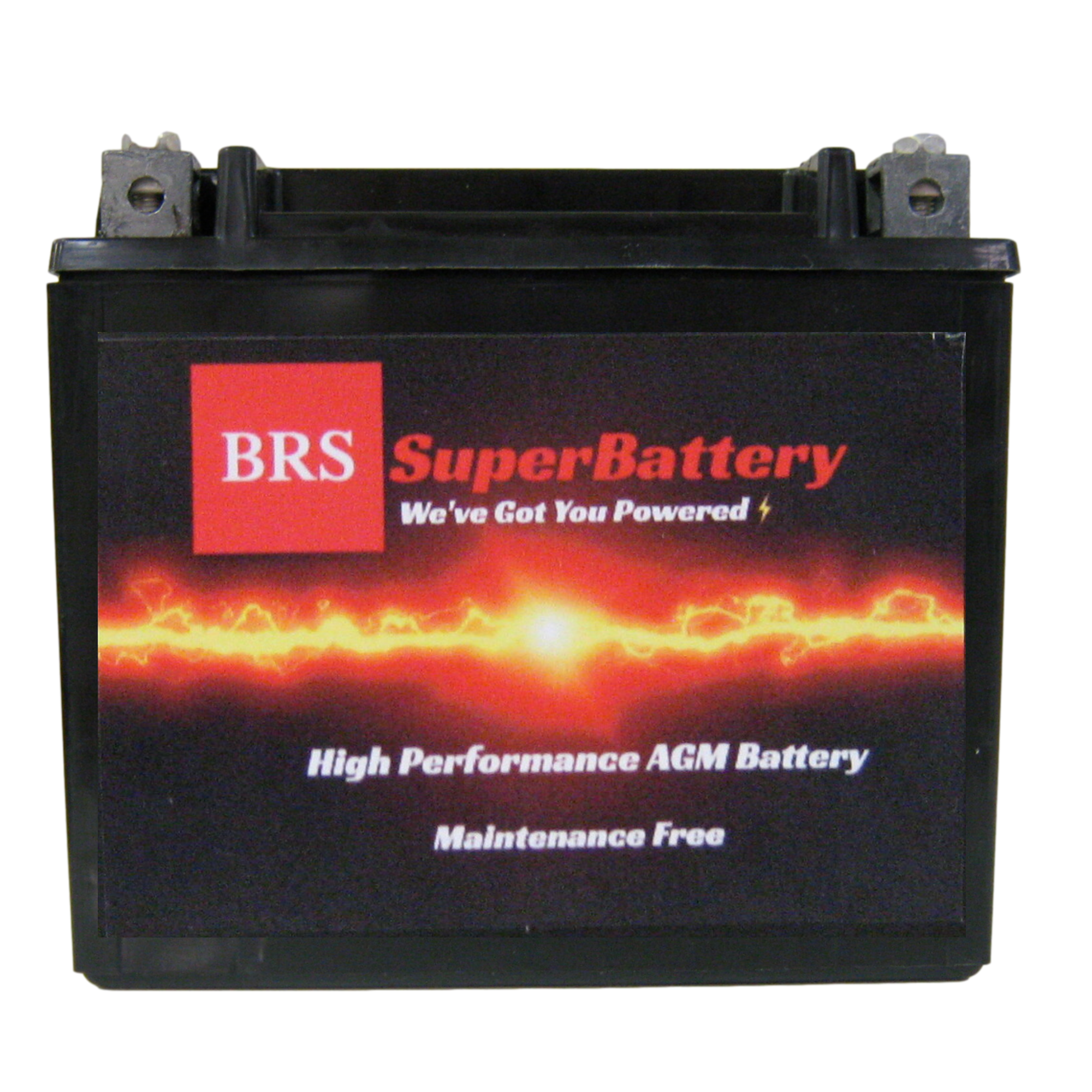 The BRS Super Battery can handle anything you can throw at it. It's the world's first Power Sports Battery with an incredible 10 Year Warranty for your motorcycle. High Performance Maintenance-Free lead acid battery For All Power Sports Vehicles such as Motorcycles.

This Power Sports battery is a type of lead acid battery and also contains an electrolyte just like gel batteries whose electrolyte is suspended in silica-type gel.  It is permanently sealed special absorbed-glass mat battery which eliminates water loss. This design allows for fewer fluid leaks and less maintenance than conventional batteries, but it does carry with it the disadvantage of reduced energy density. Lithium batteries are made from lithium-ion cells and have significantly higher energy densities than lead acid batteries.

The battery has been the battery of choice for motorcycles for decades. This battery can be charged without having to worry about sulfation on the plates, which is common with most Lithium batteries. This allows for an easier, more convenient charging process that does not require you to monitor or maintain the battery.

The question about whether AGM or Lithium batteries are better for your motorcycle is a question that many people ask and has ultimately led to some debate. The two types of batteries each have their own benefits and drawbacks, so it's important to know the pros and cons of both so you can make an informed decision on which will work best for your needs. Many people are interested in learning more about these two types of batteries. They want to know which one is better, what are the benefits of each type, which one lasts longer, how much do they cost to buy, etc.?

Which is better: AGM or Lithium?